LOCATION:  Show will be held on the grounds of the Museum, 200 Walnut Grove Road, Middletown, CT.

The museum is hosting its second annual show of military and civilian show vehicles with guns, reenactors, and military displays.  The selection of vehicles span the years from WWII, Korea, Vietnam to present day.  Visitors will have the opportunity to talk with the vehicle owners about the history and military application of their vehicle and/or equipment.  The museum will also be open.

If you have a vehicle or military related display you wish to include in this show, contact the museum at gmvmm-info@comcast.net or call 860-788-7215.

Come back soon to check up on additional events coming in the future.  Drop by the museum to experience military history, especially Middletown’s and Connecticut’s role in provisioning the military armament and sending its citizens off to defend American interests throughout our nation’s history from the earliest colonial days to the present.

Co-sponsored by the Russell Library and Connecticut Humanities.  Hosted by the museum; the museum’s library was a perfect setting for a story about a Marine and a dog rescued from the battlefield of Afghanistan.

Christine Billings of Russell Library did the introductions.  Craig Grossi, currently a Maine resident, and an ex-U.S. Marine Sergeant who served in front-line intelligence work for marine RECON, the most elite fighters in the Corps, gave an entertaining tale of how he came to adopt a stray dog off an Afghan battlefield in a remote part of Afghanistan, and how they saved each other.  Craig managed to smuggle the young pup aboard a military helicopter as they evacuated the battlefield and subsequently was aided by DHL workers to ship the pup back to Craig’s family in Virginia.  The two, Craig and Fred the dog, are inseparable.  Craig has authored two books about their shared experiences, Craig & Fred:  A Marine, A Stray Dog, and How They Rescued Each Other, and Second Chances:  A Marine, His Dog, And Finding Redemption.  The talk was well attended and thoroughly enjoyed.

Also attending and doing a book-signing of his own autobiography, Vietnam Beyond, was museum Vice President, Jerry Augustine.

Above:  Christine Billings of Russell Library doing the introductions for the program.

Below:  Craig and an attentive Fred engaging the gathering. 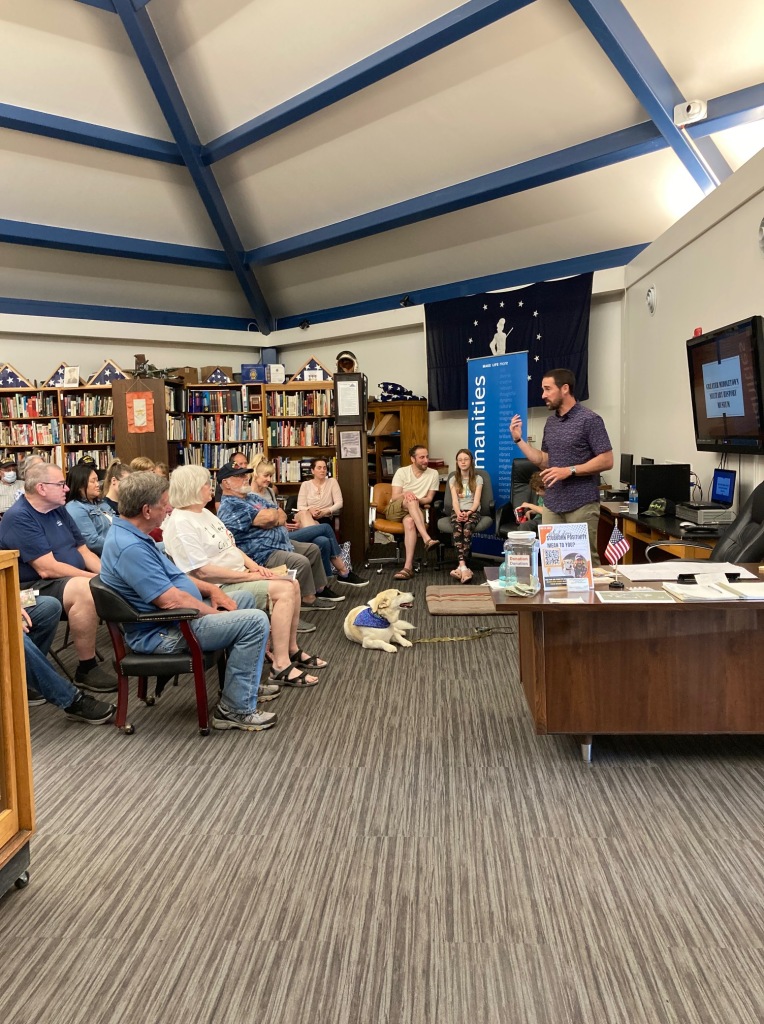 The Quilts of Valor organization came to the Museum to present a personalized quilt to honor Jack Botti’s service to our country.  Family and friends gathered at the museum for the event.  The presented read Jack’s military history from a synopsis authored by Ken McClellan, president of the Museum.

Jack enlisted in the US Army in 1975, served as an Infantry medic for four years in West Berlin, Germany.  He reenlisted in the Army Reserves to serve in the 340th General Hospital 1979-92 and the 405th Combat Support Hospital 1992-1999 and deployed to Bosnia in 1997 as the First Sergeant.  Promoted to Command Sergeant Major 1999.  He continued serving in various units subsequently for a total of 38 years for the military.  His list of service awards is numerous and notable.  Jack continues to honor his country by his membership and Commander of the Middlesex Post 583 VFW, Commander of the Council of Veterans of Middletown and Board of Directors of the museum.

LOCATION:  Show was held on the grounds of the Museum, 200 Walnut Grove Road, Middletown, CT.

HUGE thanks to the owners of our military and civilian show vehicles and guns, reenactors, and military displays for making this inaugural event a success!  Special thanks to our volunteers, particularly the large contingent of Eversource employees and our area veterans who regularly support museum events.

SHOW SPONSORS:  The Museum appreciates the support of local businesses that made this event possible.

Our Future Is Clean Energy

Some of the other vehicles at the show.  (Photos by Joan Liska) 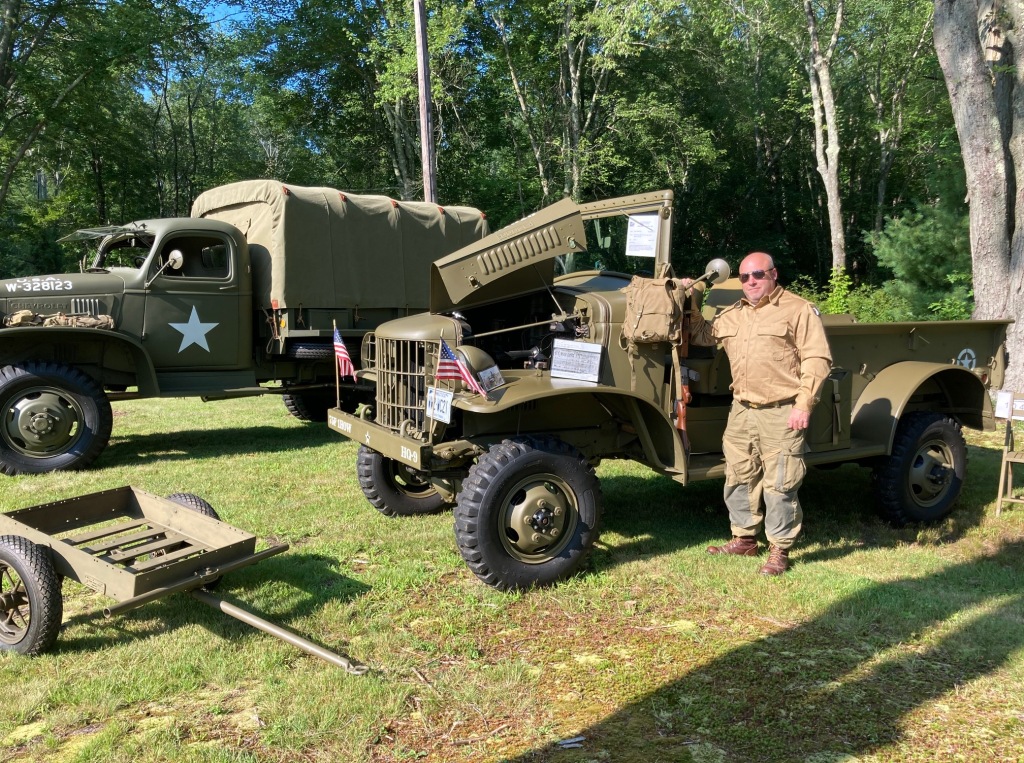 On Saturday, October 12, 2019, the museum held a dedication ceremony to honor a new exhibit:  a giant scale model of the USS Dorado (SS-248) submarine, one of two U.S. Navy submarines lost in the Atlantic Ocean during World War II.

On Saturday, April 13, 2019, was the Official Grand Opening for the Greater Middletown Military Museum. There was a Ribbon Cutting and Open House at 2:00pm and a Dinner at 6:00pm.

On Veteran’s Day, 2018, an open house was held to preview the newly built Greater Middletown Military Museum.  The museum collections had been delivered from the Remington Rand storage facility and other scattered locations and now were finally housed in a single location at its new home on 200 Walnut Grove Road, Middletown, CT 06457.

The SGU National Monument (Secret Guerilla Unit) was delivered and assembled on site (a Huey helicopter owned by the U.S. Air Force and on loan to SGU National Monument CT Foundation).  The monument was ceremoniously dedicated also on Veteran’s Day, 2018.  This helicopter flew combat missions in Laos by the CIA and Laotion allies during the Vietnam war.

On June 20th 2017 a ground-breaking ceremony was held for the Greater Middletown Military Museum.  In attendance were State and Local government officials, representatives from Veteran’s organizations, Museum Board of Directors and Members as well as Westfield Fire Department Members and the Public. 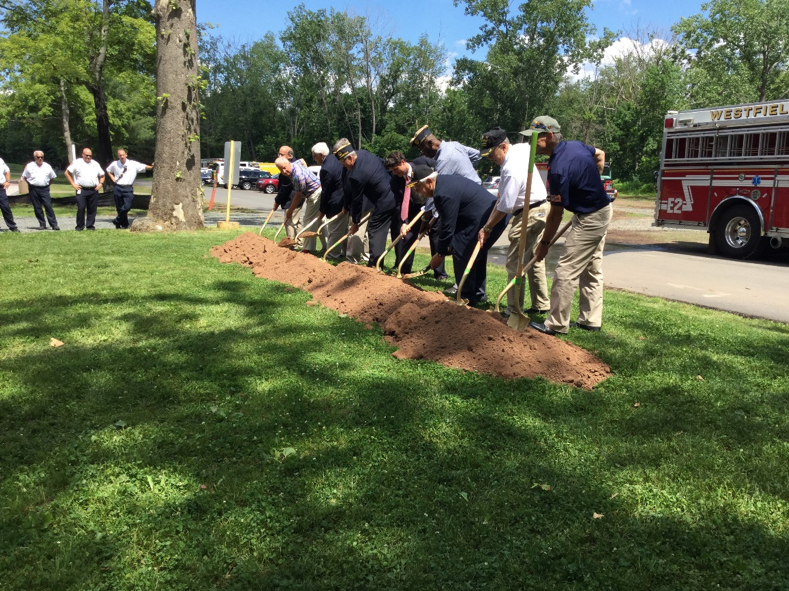